A great tournament for a team that had to be rebuilt after 1 year without any practice or game due to the pandemia!

A great re-start for the 2009 Boys after 1 year without any practice or game due to the pandemia!

2007 Boys Champions at National USFF Tournament in July/18 at Santa Clara Convention Center, Santa Clara, CA - the result of PATIENCE and DEDICATION for more than 2 years of training with the main purpose of teaching the good tips and techniques of futsal! The core of this team was also the champion of the DVFL League in the 2017/18 Season for 2007 Boys.
2008 Boys - 1 team Finalist and 1 team Semifinalist
2009 Girls - Semifinalist

U12 Boys: Finalist - DV Diablos - first appearance in National
U15 Boys: Finalist
Open Women: Finalist
Seven teams went to National Tournament 2015. The U15 Boys, that started with coaches Ricardo Da Silva & Rodrigo Da Silva, were being coached by Ramon Rosas. The U8, U9, U11 & U12 Boys were all formed and trained by coaches: Ricardo Da Silva, Rodrigo Da Silva, and Bijan Sadeghy.
The Open Women team counted with the experience of great players such as: Tafa & Sissi that led the new players towards the championship match. The U12 Boys team faced a very good team in the championship match and went out of the tournament eager for more practice to beat that team in a next future match.
The U8, U9, U11 Boys, and Open Men teams had their first appearance in a big futsal tournament and the U8 Boys, formed mainly by U7 players is a very good promise!
New programs are being planed for the 2015-16 season with the intention to take these teams again to Nationals and include new teams too! 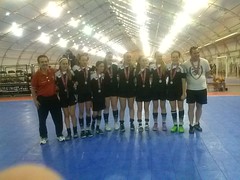 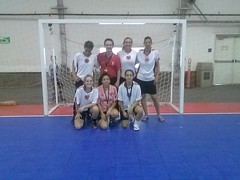 U12 Boys: Semifinalist - DV Diablos - first appearance in a Futsal Tournament
U14 Girls: Semifinalist - DV Azuri A
U14 Girls: Finalist - DV Azuri 1
U15 Boys: Finalist - DV Diablos - the core of this team together since U12 Boys
Open Women: Semifinalist - DV Diablos
Two teams for the U14 Girls were put together to have their first appearance at a Futsal Tournament and with only a couple of practices, both teams achieved great results and almost faced each other at the championship game as both reached the semifinals. The team shown in the picture ended up as finalist of the tournament.
The Open Women team is missing a few players that could not make the game on the last day of the tournament and these players basically got together at the tournament with some players that came from Brazil to add their experience to the team. The experience and skills brought by players such as Tafa and Sissi were watched by many futsal fans at the tournament that were even able to get some autographs from these famous Brazilian National team players!
The U12 Boys and U15 Boys are not shown in a picture but had very strong appearance at the Regionals. The core of the U15 Boys team is made of players that were semifinalist at the National Tournament when playing as U12 Boys. The current U12 Boys team is made of players mainly from two teams that were observed and selected during the DVFL league games. The only loss of this team was the semifinal game during overtime - they will be ready for Nationals! 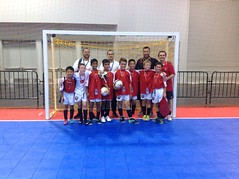 U10 Boys: 3rd place - DV Diablos - first appearance in a Futsal Tournament
U11 Boys: Semifinalist - DV Mustang
U14 Boys: Finalist - DV Diablos
The U10 Boys team was gathered by San Ramon coaches that wanted to expose the boys to Futsal. They had a few practices with coaches: Ricardo Da Silva, Rodrigo Da Silva, and Bijan Sadeghy and were able to get their third-place medal at their first National Tournament. 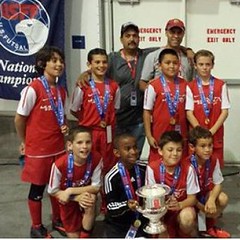 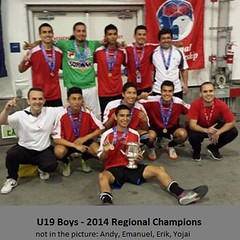 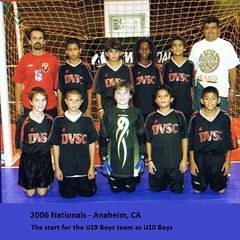 U11 Boys: Champion - DV Mustang
U12 Girls: Semifinalist - DV Rebeldes
U19 Boys: Champion - DV Diablos - core of this team together since U10 Boys
The first picture on the top left shows the U14 Girls DV Magic team formed with the U14 Girls Magic soccer team. It was their debut at a Futsal Tournament and did not make to the semifinals just because of goal differential. In just a couple of practices with coaches Ricardo Da Silva and Rodrigo Da Silva, those girls were able to grasp very important fundamentals of the futsal game!
The upper right pictures shows the U11 Boys DV Mustang that were champions in the league and got ready to grab the champion title at the Regionals Tournament.
The two pictures in the lower row shows the U19 boys that were the champions in the Regionals and the picture on the right side shows one of the reasons that the team has been so strong - the core team has been playing futsal together with DVFL, under Ricardo Da Silva's, Rodrigo Da Silva's and Elisama Padilla's orientation since 2006 at their first appearance at the Futsal Nationals. Some players could not make the final match at Regionals but gave a strong contribution during the previous matches.

U14 Boys: Semifinalist - DV 99 - core of the team together since U12 Boys
Open Women: Finalist - DV Storm 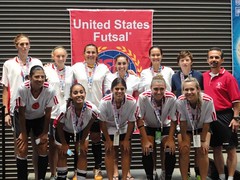 U12 Boys: Finalist - Diablos - first appearance in National Futsal Tournament
U13 Boys: Semifinalist - Diablos
U16 Boys: Semifinalist - Diablos
U19 Boys: Semifinalist - Diablos
Open Women: Finalist - Diablos
The picture above on the left shows all players and coaches involved in the Nationals 2012! Some of the players started playing futsal with DVFL at a very early age such as Elisama Padilla who started futsal in the DVFL U10 Boys team. This year he is shining at the San Jose Earthquakes Academy (invited to play for the Reserve Team) and played for for the DVFL U19 Boys.
Among the players there is also Marcia Tafarel (Tafa) that has been playing futsal for more than 20 years and has been also worked with DVFL as a coach and certified referee.
The picture on the right shows the women that got together in a last-minute basis with the desire to represent DVFL - some players coming from Brazil to add experience - with only 1 game to practice together before the tournament, those women were able to reach the championship game.

U10 Girls: Champion - Diablos
Aaron Silva had an important role in putting this team together and, with coach Ricardo Da Silva, led these young girls to their first champion title in a Futsal Regionals Tournament. 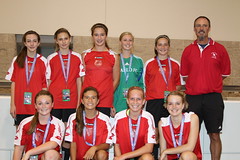 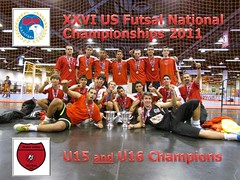 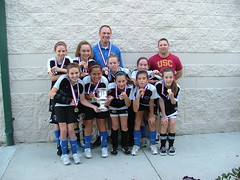 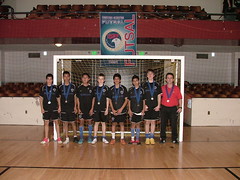 U14 Boys put together by coach Ricardo Da Silva and trained by Rodrigo Da Silva, Marcia Tafarel and Eddy Schmitt. They were getting this team ready for National Tournament. The picture is showing some side-small pictures of players that could not be at the last game. 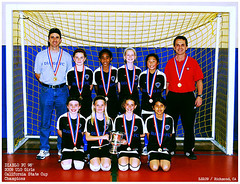 U10 Girls: Champion - Galaxy
The Galaxy team was put together by some parents of this team that wanted to expose the girls to their first Futsal Tournament. Ricardo Da Silva helped Kent to train the girls. 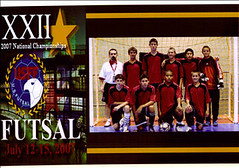 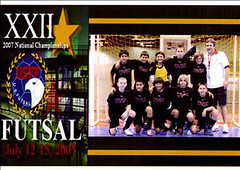 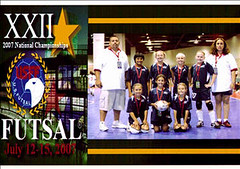